I had occasion to buy a Titan Tornado that ran off the NW end of my runway. It sustained some damage to the nose and the left wing tip.

The accident left the plane un-flyable and I purchased it from the owner with plans to either fix it or scrap it out.

The next pictures show the front end with the glass cowling removed. The thin walled tubing crushed very easily allowing the nosewheel to come into the pilot compartment. Oddly, the nose fork itself with the wheel was totally undamaged. The damaged tubes were extremmely thin walled, and were replaced with 5/8 by .058 tubing. This may add a half pound but allowed better rewelding to the original frame ring. 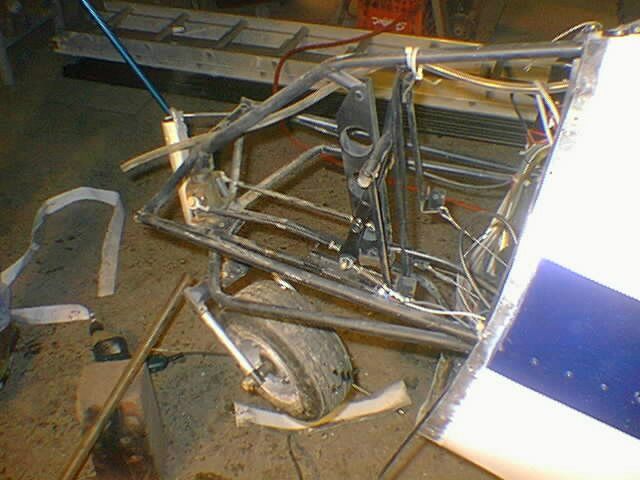 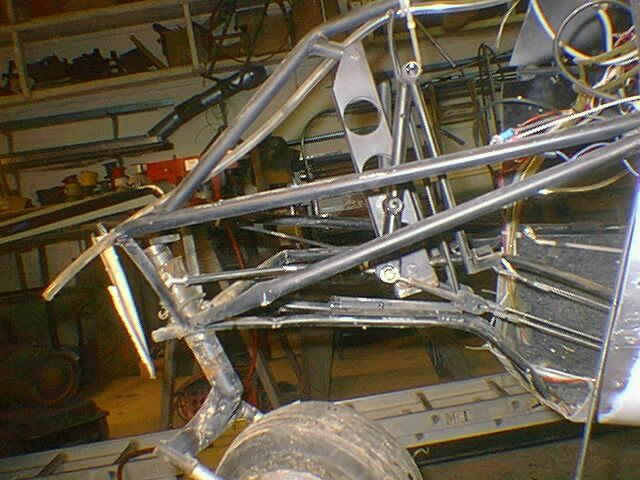 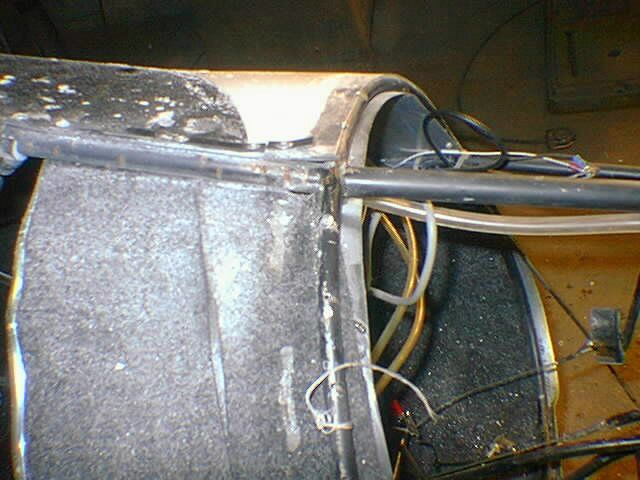 This entire assembly was removed, the adjustable pedal feature was saved as were the rudder pedals. The oval frame just ahead of the dash was sleeved with half round pieces since it was crushed by the tubes at the front during the crash. The battery was moved from under the seat and a small mount was made at the front of the repaired area. The solenoid was located here too. This allows the heavy battery wire to carry current through the plane only when the starter is engaged. The small steering horn was welded to the rudder push rod plate to provide a more positive steering.

This picture shows the repaired front end. Some paint and it looks as good as new, if not better. Moving the battery will allow a lighter person to fly it with less trim. 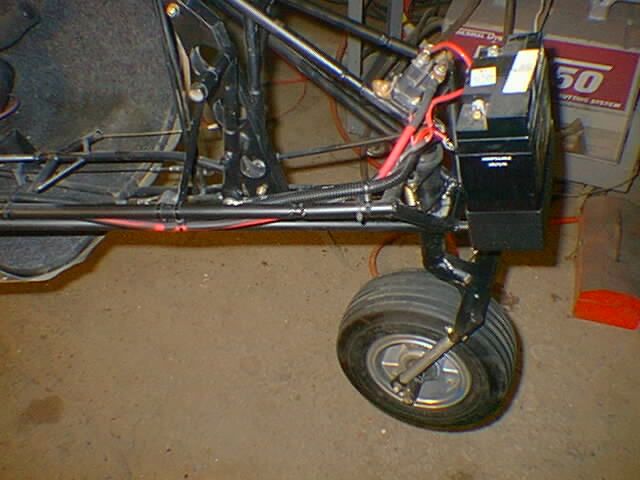 The dash was dedone with one row less gauges at the botom to allow more foot and ankle room. The wiring was redone with shielded cable for all the AC runs throughout the plane.
One problem that helped the plane crash in the first place was the 4 1/2 inch drum brakes. These are OK for a single place plane with small tires/wheels, but as the wheel size goes up, so must the drum diameter. Disc brakes were installed by removing the factory axles, and installing Hegar EXP brakes. A lever was attached to the left side of the pilots seat for the hydraulic brake actuator.

This next picture shows the brake lever as installed. 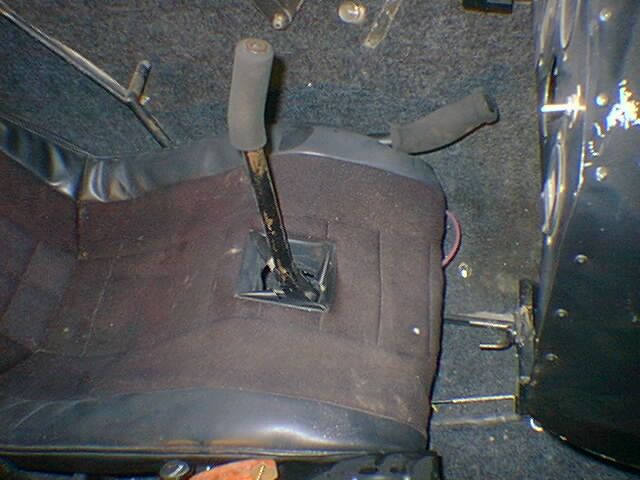 The wheel was removed and the drums and tire swapped onto the Hegar brake wheel hub. The hydraulic brake makes for a very clean setup at the whel end of the axle.

Another item that caught my attention even before the crash occurred was the crude muffler mount system. It is the same as the one used on the Challenger. It is very heavy being a rolled plate of stainless, probably expensive for what it does.
Since it is attached with rubber mounts to the head studs on the 503, it can only restrain the muffler from falling away from the engine. It can not offer any support at all due to the rubber mounts.

Here is a picture of the mounting minus the muffler to show the flimsy attachment. 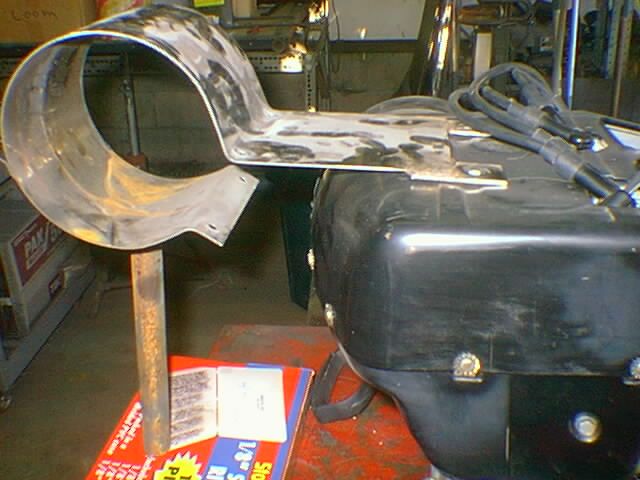 A proper muffler mount will both guide and support the muffler, thereby taking the muffler weight off the elbow and manifold. To do otherwise leads to cracking of the Y pipe.

I installed my custom mufler mount shown in the next picture. Also, the area below the MAG end of the engine had numerous small, and some large, holes cut in it over the years. This area was recovered with Stits fabric and repainted to match the original white. During the recover, several small aluminum plates were glued in place to allow a neat entry point for the numerous wires from the engine to the electrical panel. 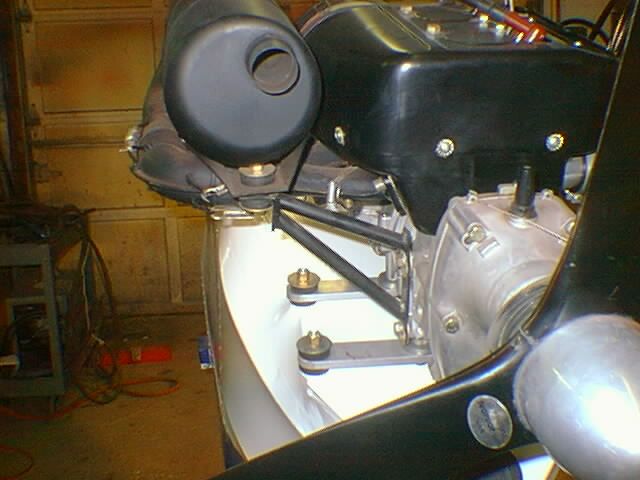 Another item that seemd to need some change was the fuel system. The original had an electric boost pump running parallel to the mechanical pump. The mechanical pump was located about a foot above the engine on a small tube near the rear of the wing. I have no idea why it is this way since it just means the pump has to lift the fuel higher. So the tube was cut off, and the pump located close to the rear of the engine shortening the pulse line from 24 inches to about 7. 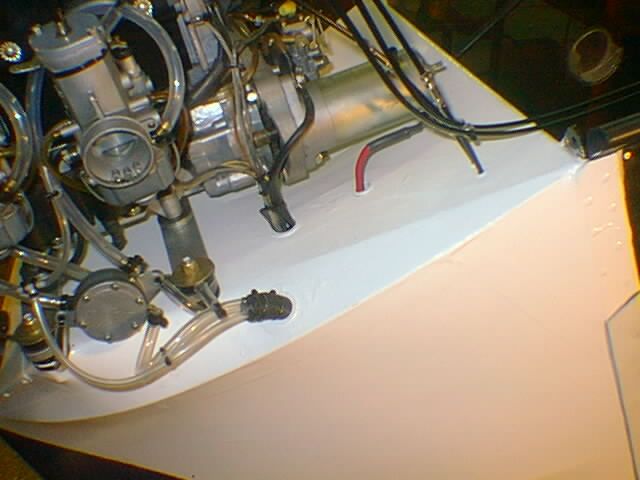 One item that also seemd a lot of effort for the benefit was turning the fuel tank side to side. the original tank install had the outlet for the pump on the left side of the plane. The tank was reversed so the outlet would be just below the fuel pump. Having short lines seemd like a good idea. 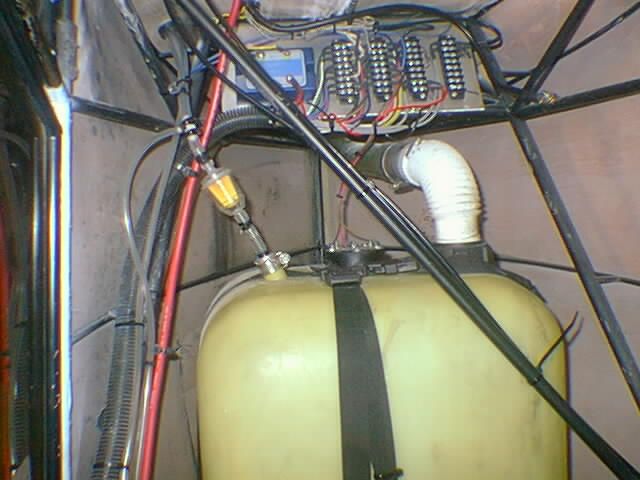 The plane had mechanically adjustable needles. They are controlled by small knobs on the ends of some cables inside the pilot seat area. They didn't trun well, had some serious hesitations and it was difficult at times to tell if they were in, out, and they often got stuck at the end of the travel. The inner wire was a braided cable, stainless, and the housing was an unlined style. The housing was replaced with a teflon lines housing, and the end where the knob attaches has a small ferrule soldered on rather than having the set screw smash the stranded wire. This made for much smoother operation of the needles.

Several other problems were noticed as the work progressed. The rudder and elevator cables were uncoated stainless but the nicos and the thimbles were falling out, the wires allowed to pull directly on the metal attach points without any thimble protection for wear. All the cables were replaced with coated cables and routed so they did not rub on each other. the original cables were twisted inside the rear boom tube.

While replacing the cables, I also discovered that the small horn on the lower end of the rudder leading edge was quite loose and allowed the rudder to turn a bunch. 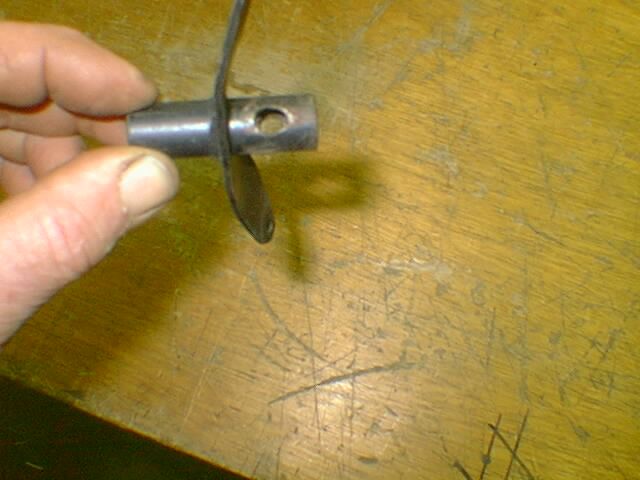 The parts were removed and the hole in the rudder horn was found to be almost large enough for the head of the connecting bolt to go through. A short sleeve was welded over the original horn and a new hole was drilled. The fitting is shown here. 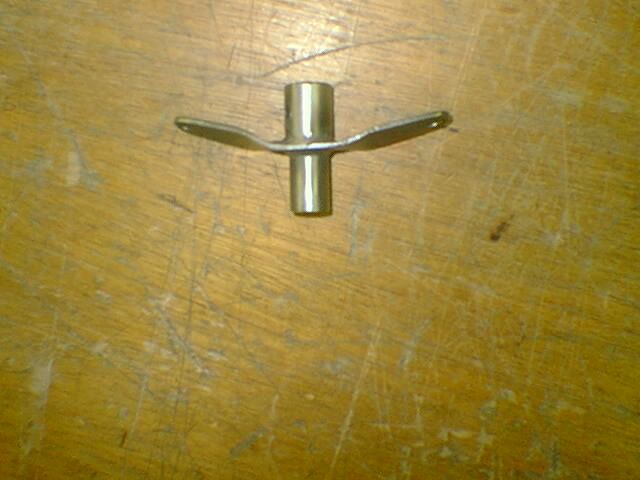 The project is all but done as of today, May 05, 2004. This is a shot of the cockpit with the new panel, newly arranged instruments, etc. The right side and the lower edge have been trimmed to allow easier acces, the interior has been redone with grill cloth for better appearance and sound quality. All the small details have been touched up to bring the new look back. 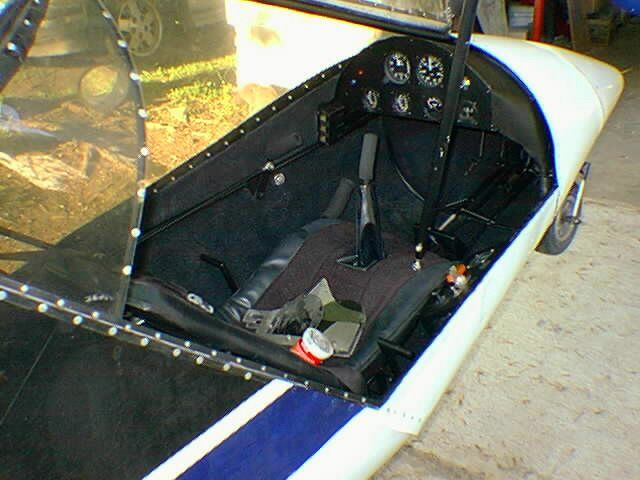 This shot shows the rear seat just as neatly done as the front. The plane has dual controls except for the newly installed hydraulic brake which are front set control only, and they do work well, at least in the driveway !! 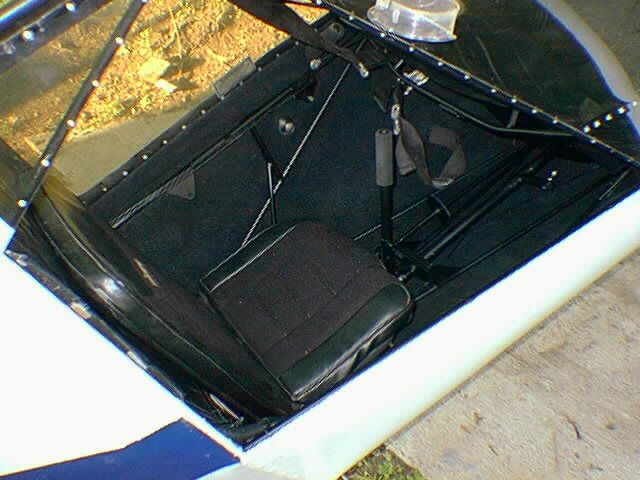 This shot shows the newly made removeable nosecone. It is attached with five small screws, easily comes off with a screwdriver for toal acces to the back of the instrument panel, the pedals, the nose gear, etc. I hope the factory tries this as it seems a good idea. the battery has been relocated to the front to ease service, and checking connections, The solenoid also is located in the front to reduce the hot cable in the plane to a minimum. 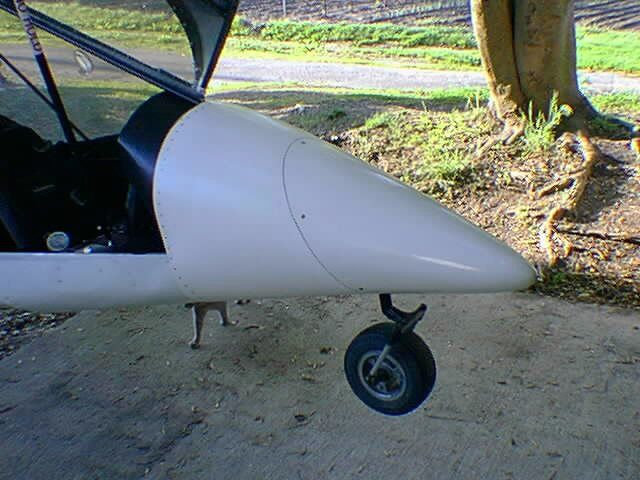 This piture shows the lower middle of the wing with the new headliner, and the newly installed flap motor. The wing was trial fit in the backyard, bolts were snug but removable and the whole assembly is ready for transport to the field. Many small items were fixed such as a bit of a clearance problem with the rod ends and the aileron bellcrank arms, the flap rod ends, etc. The access hole covers were removed and a complete inspection was done. A friend , an AnP, has gone over the plane very carefully for all these minor problems, which are similar to those found on GA planes. 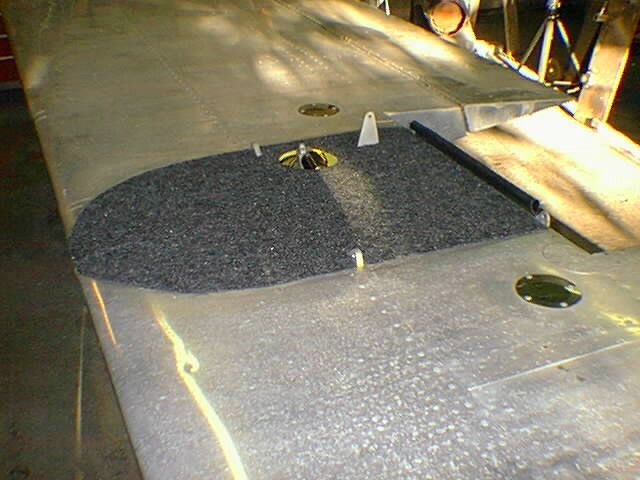 This picture was taken with the wing inverted on the sawhorses following some headliner repairs. The new section of skin is is the one nearest in the picture. It installed nicely using pop rivets per the manual. the new wing tip fit rather well to. The quality of the glass work was much better on the new tip, as it had no parting line ridge where the mold separates.
It was a bit thinner though and requires a bit more care when handling the wing. 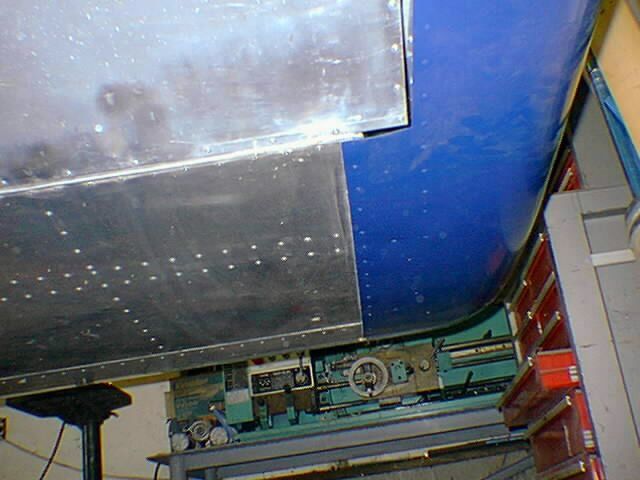 Here is a shot of the fuselage ready for trailering to the airport. I may or may not care for flying this plane as i am a Quicksilver man to the end, but it sure does look sleek and stylish by camparison to my preference in planes.
Now that the wing and cabin area have been repaired, repainted, etc, the tips of the stab need repainted too, to match the rest of the planes appearance. Maybe you never get done with one of these planes,,,,,,,,,,,,,,,

I'll add a couple pics of the assembled plane after it gets hauled to the airport,,,,,,,

Meanwhile, here is the original plane shortly after being assembled from the kit.